A year ago, Nanaimo Foodshare, in partnership with Manly Media, Seniors Connect and the City of Nanaimo launched the Setting the Table project. Documentary and educational filmmaker, Paul Manly taught the group about video production and then mentored them through the process of documenting stories that interested them. The participants determined the content of the videos, which include videos profiling seniors involved with bee keeping, community gardens, the farmers market, fermenting vegetables and Eden Gardens. A local group of self-advocates with diverse abilities profiled their involvement with the Good Food Box and Cooking out of the Box programs.

The Setting the Table project is funded in part by the Government of Canada’s New Horizons for Seniors program with in-kind support from Manly Media and Nanaimo Foodshare. Additional sponsors include the City of Nanaimo, Berwick on the Lake, Thrifty Foods and Seniors Connect.

Doors open at 6:30 and the evening starts with a mix and mingle with finger food and beverages before the program begins at 7:00. The event is free and open to all members of the public. Special thanks to our sponsors, Thrifty Foods, Berwick on the Lake, the City of Nanaimo and Seniors Connect. For more information contact Paul Manly at Nanaimo Foodshare [email protected] or call 250-753-9393

In one evening, there is something for everyone!

Delicious appetizers prepared by Foodshare’s Cultivating Abilities group will be available for the mix and mingle. A very entertaining, heartwarming and educational evening.  AND an opportunity to support Foodshare.   There will also be a raffle.  Great prizes:  A golf package, a photo shoot, a fancy dinner for 4 at Berwick on the Lake, and other great prizes.Tell your friends!  and bring them along!

Chair Yoga – Fitness For Any Age with Sheila Crampton

Today, we are looking at Chair Yoga – the fitness craze that is great for everyone at any age! Seniors Connect was joined by Sheila Crampton, Chair Yoga Instructor from Bend Over Backwards Yoga Studio and at the Seniors Connect Centre, and two of her students – Donna Lee Criss and Jodi McEwen.

This week Seniors Connect learned all about the upcoming programs at Vancouver Island University Elder College Program. We were joined by  Elder College Board Member Tim Schewe who shared with us why Elder College is beneficial to an overall positive aging experience.

Senior Moment is a blog forum for older adults in Nanaimo – those 55 +.  A “Senior Moment” is most often associated with the loss of memory that many of us experience when we walk into a room and then forget what we came in for, for the blog column, we want to celebrate the lives, achievements, stories and the “Senior Moment” for those who are active in our community and have a story to share that demonstrates the value and wisdom that comes with a life time of experience. If you would like to be a contributor, please contact  EngAGE with Seniors Connect or call 250-754-3331 x 203 and ask for Jane. 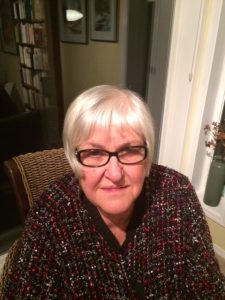 Carol has worked as a social worker, as Executive Director of Nanaimo Family Life and as instructor and Dean of Human Services and Community Education at Malaspina University-College (now VIU). She was awarded the ACCC National Award for Excellence in Leadership, an Honorary Doctorate of Letters Degree from VIU, the Order of B.C. and the Queen Elizabeth II Diamond Jubilee Medal. Carol has published a collection of short stories and four works of memoir. Her short stories and reviews have appeared in literary journals such as Room, The New Quarterly, Grain, Malahat and Event. A new book on bereavement will be published by next year.

Recently I designed a button for the No side of the Nanaimo Referendum about the proposed Event Centre: a white elephant with a diagonal red slash through it and the words “Vote NO.”  I thought it offered a very clear message which indicated that the Event Centre would become burdensome, useless, and expensive to maintain. My contemporaries appreciated the symbol and sported the button.

To my surprise, I discovered that many young people, though happy to take a button and even take up the cause, had no idea what the white elephant meant. They’d never heard of a white elephant!

In my childhood, many decades ago, the term was well known. Every church bazaar had a white elephant table, featuring items that donors no longer needed:
odd bits of china, peculiar ornaments, mismatched kitchen utensils, jewelry, lampshades, and so forth. This was a regular feature of fund-raising events, next to the home-made baking, flower arrangements, used books and raffle tickets.

Apparently this doesn’t happen often now. Come to think of it, we don’t see church bazaars as often as we did in the past. It got me thinking about obsolescence, about my advanced years. Got me wondering about what that expression really means.

The New Oxford Dictionary of English defines a white elephant as “a possession that is useless or troublesome, especially one that is expensive to maintain or difficult to dispose of.”  Perhaps I’m a bit of a white elephant myself, in more ways than one. Certainly the dictionary definition seems to fit.

But wait a minute: the expression originated, long ago in Southeast Asia. In India and old Siam, the white elephants wer rare and prized, symbols of royal power and good omens that might help to bring rain. It was precisely because they were so very valuable that they were sometimes unwanted: because their upkeep was expensive and they were too holy to be used as a working animal.

The white elephants are like the elderly population, I decided. Like them, we are both a treasure and a burden.

Well, I’m going for the “treasure” side of the definition. After all, whether people understood the symbol or not, I think my buttons did some good. They made people smile. And the NO side won the referendum, 80 to 20!

And, more important, I was out there, old white elephant that I am, standing up for and speaking about my beliefs. We elders have lots of work to do!

Let’s do it! And, while we are at it, let’s bring back those old-fashioned church bazaars with their white elephant sales!

Brought to you by the Nanaimo Family Life Association, Wise Folks is a locally produced tv show about issues important to older adults. Filmed right here on Vancouver Island on Shaw TV,  the show is hosted and filmed by older adults, proving it is never to late to try your hand at something new. As Wise Folks, we have a lot of wisdom to contribute and the ability to laugh at ourselves – check out Dan & Dan! Do you have a great guest idea? Contact Cathy Holmes at 250-754-3331 x 202 or email us.

Episode 2 – A New Age of Transportation

The Seniors Connect program has a senior lead group that is focused on getting Nanaimo declared an “Age Friendly City” as one of their very first initiatives. Today on “The Show” we are joined by Nanaimo Seniors Task Force member Geraldine Collins, who is giving us a little insight into who the group is and what they are all about.

Learn more about the upcoming Reframing Aging contest with Seniors Connect on Shaw TV’s The Show.

Seniors Connect is joined  by Ken Greig from Cedar Valley Memorial as we explore what end of life planning can do for us as we entire our senior years.

Seniors Connect was joined by the Anti Ageism group and Healthwell to hear all about the Seniors Celebrate Month in Nanaimo.